I started out climbing as a way to get out of the house and start to view the world around me.  In the 32 years prior I had never really taken the time to appreciate the world for what it was.  I had no clue where it would take me, or what I would learn, but I did know I was sick and tired of sitting around saying "there's nothing to do".

My climbing career thus far has been an interesting one.  In the first 6 months I sustained 2 knee injuries, multiple bear and snake encounters, traveled damn near across the country, and yet the worst thing I faced was looking back at me in the mirror.  I have always been a quitter.  Plain and simple.  I'm a spoiled little brat.  I had to have people around, I couldn't do anything too hard, and my mind was always telling me I wasn't good enough.

You can't quit in the backcountry.  Well, you can, but I have harmed enough people in my life, I wouldn't do that in my new found venture.  So when I was 8 miles out in the woods, I had to walk 8 miles back.  Commitment; success number one.  Though the woods gave me a sense of oneness with my Creator, I still had that inner battle and would just 4 months in to my climbing career be contemplating suicide yet again, for the umpteenth time over the course of 22 years.  I finally broke down and went and saw my doctor.  He prescribed me with an anti-depressant and told me to keep active.

At the time I was jobless, I knew without a miracle I was to lose my house.  I had already blown up one vehicle and my second one was on it's last leg.  I took the meds and headed back in to the woods.  3 weeks later, after bagging Mount Mitchell in North Carolina, the highest point east of the Mississippi, I promptly blew out my knee on the descent.  Sidelined, I can't even catch a break in life.  Yet I continue with the meds, and tried to stay as active as possible.  A few weeks later it occurred to me that I was sad.  I sudden sense of relief came over me.  I was sad.  I was sad!!!  I had never felt sad before, just depressed.  I was the happiest sad person to grace this planet.

For the first time in my life I was down about something, but knew it would get better, and even more so, I didn't think about eating a bullet sandwich.  I celebrated by continuing on the meds and began rehabilitating my knee.  It finally healed and my mind began healing as well.

Enter 46 Climbs.  46 Climbs is a national event where people pledge to climb certain mountains to raise money for the American Foundation for Suicide Prevention.  Now here is something I can get behind, or in front of.  I immediately signed up and went to work trying to raise funds.  I figured I'd kick it off myself and donate $25 to my fund.  I made Facebook post after Facebook post, and slowly the dollars started coming in.  Mostly family and my closest friends, but they came in.  I found a greater purpose than myself.  I know how it feels to be doing everything and still be hopeless, I also know how it feels when they finally goes away.  I want others to feel that too.  And here is my chance.

Last Friday we set out for the Adirondacks for my climb.  I was $116 shy of my goal of $500 but that didn't matter, I was heading to the place I love, the mountains.  My climbing partner and son in tow.  What more could I ask for?  As we headed up the road I got an email saying I had another donation.  I checked and it was the final $116 needed to hit my goal.  I was elated.  I had never done anything like this before, and here it was being a total success.  In to the woods we go!!

We climbed our hearts out and bagged 2 of the 3 peaks I was hoping for.  Due to circumstances we had to leave the 3rd, another thing I've learned, it's ok to fail.  But did we fail?  We made the effort, I raised the money, my entire climb was devoted to a stranger, someone I may never meet, but someone I could help by living.  And living I did, and continue to do.  I came home with a new attitude toward climbing.  Remembering what it has done for me.  Where it has taken me.  Who I have met, and who I have not.  The mountains are big, the challenge is hard, sometimes you fail, sometimes you succeed, sounds a lot like life. 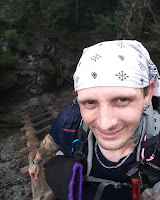 My donation page for my 46 Climbs event page is still up.  You can read more of my personal story there and some of the other struggles I have faced in life.  You may also still donate.  Every dollar helps.  Thanks and God bless!!

The spring of 2018 was a purge of sorts for me.  Mentally, physically, emotionally, and spiritually.  I had grown enough over my 2 1/2 years... 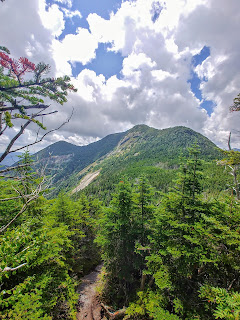